Impending mandatory changes in lifeboat hook designs promise to address recurring accidents that have resulted in injuries and deaths. 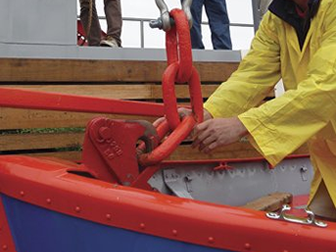 All hook design manufacturers must perform a design review, followed by physical testing under load, witnessed by a third party such as a classification society. If a hook system fails at any point during the evaluation process, it will be deemed non-compliant. According with the new regulation msc.1/1392 any non-compliant hook release systems have to be replaced on ships by their next dry dock period after July 1, 2014, and before July 1, 2019. The evaluations will aim to identify fine tolerances or component deterioration that could jeopardize the safe operation of a hook release and retrieval system.

Due all these reasons our team will be ready to carry out from April this year hook replacements according MSC.1/1392 in Spain.

If you need more information please contact Iberials Lifeboat Service through our website. We are at your disposal for any questions.